The guidebook of how to use Tuya IoT Platform to quickly develop a smart product.

Develop an IoT App, support the seamless synchronization between edge and cloud, maximizing the advantages of IoT.

A brief introduction to Tuya Data Analytics Platform and how it provides insight and improves monetization.

Please visit our Help Center if you have further questions about us.
Demo
Cases
Partner
Search
Cancel

IoT devices have gained ground in many homes and industries. Increasing importance has been attached to the implementation of secure and flexible device control and management. Therefore, well-engineered features can be integrated to achieve these purposes, such as device control, group management, smart scenes, multi-control linkage, and scheduled tasks. This topic describes the helpful knowledge about IoT device control by mobile apps.

The device control capabilities mentioned in this topic apply to the development of Tuya IoT mobile apps. Whether your App SDK provided by a third party supports a certain control method only depends on that App SDK.

To simplify device control, Tuya abstracts each function of IoT devices into a data point (DP) that defines the current device status.

Tuya allows mobile apps to send a control command to a device and achieve the desired functionality. The following line shows the command format. The DP value depends on the function definition for the product on the Tuya IoT Platform.

To meet your needs in smart scene configuration, Tuya IoT App SDK provides APIs that enable customized smart scenes. If the status of a smart device changes, or if an environmental condition changes, other certain smart devices have their switches or status changed. This is how a smart scene works.

Smart scenes include the following types: Automation and Tap-to-Run.

Users can set specific conditions to run a smart scene. When the conditions are met, the Automation scene is automatically triggered. The following condition types are supported:

Users can add actions to a Tap-to-Run smart scene. Later, they can tap the scene to run it when needed. Scene actions support the following types of objects:

A device group includes devices of the same type and gathers a series of devices. Wi-Fi and Zigbee devices can be grouped in most cases.

Users can create different groups of devices on an IoT mobile app by region, type, permissions, or other rules. This allows numerous devices to be managed in bulk. For example, firmware updates can be performed for multiple groups of utility meters in a specific project.

Tuya provides native control panels that are developed with native code. Panel control support most Powered by Tuya products and DPs, and features fast response and high compatibility. You can easily integrate panel libraries into your project to implement all-around capabilities for products in Tuya’s ecosystem. 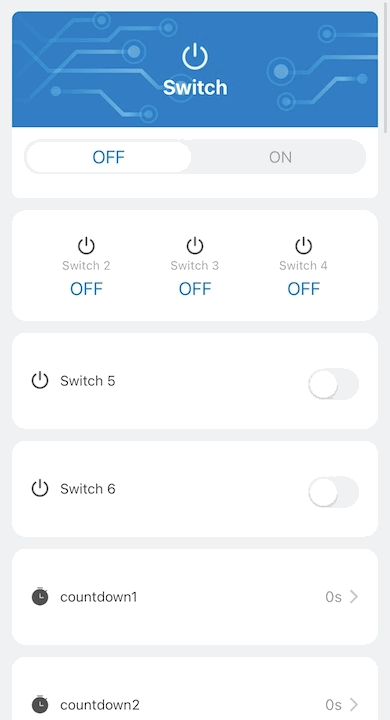