Self-Developed Smart Life App is one of Tuya’s IoT app development solutions. This solution provides the services that enable connections between the app and the cloud. It also supports a full range of services and capabilities that customers can use to independently develop mobile apps. For example, you can integrate with the Custom Domain Name and SSL/TLS Certificate services, as well as the capabilities of Smart Life App SDK, Extension SDK, and UI BizBundle. You can go to Tuya IoT Development Platform > App > App SDK > SDK Development, download the latest App SDK resources, and then get started with SDK-based app development.

Self-Developed Smart Life App is classified into the Trial and Official editions:

The Custom Domain Name and SSL/TLS Certificate services enable Smart Life App SDK-based apps and respective smart devices to communicate with the cloud through custom domain names and custom SSL/TLS certificates that are configured on your terms.

Differences in features between Trial and Official editions 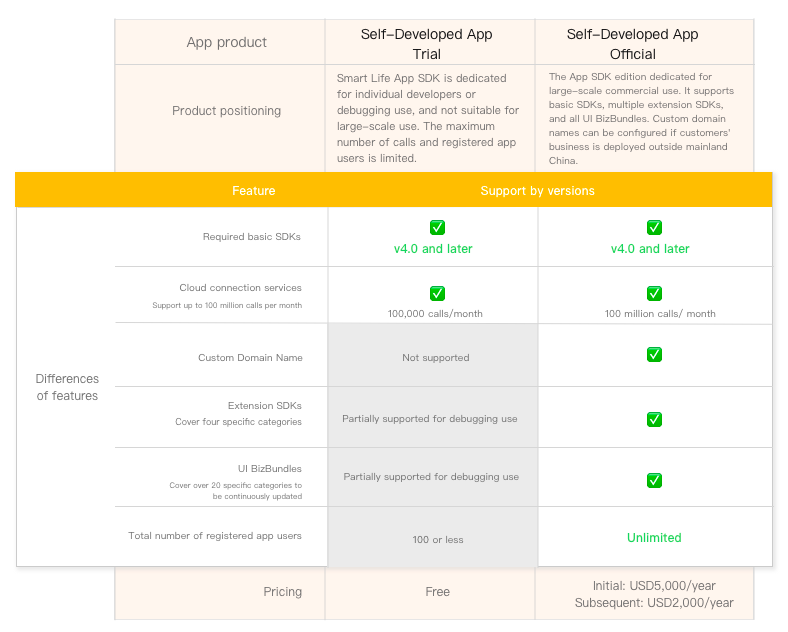 How to treat your legacy version of Smart Life App SDK

1. What is the App SDK version number for the paid service Self-Developed Smart Life App?

2. If I do not upgrade to Smart Life App SDK v4.0 and continue to use a legacy version, do I need to pay any fees? Is it a forced upgrade?

If you continue to use a legacy Smart Life App SDK version (earlier than v4.0.0), you do not need to pay any fees and can still use it for free. This upgrade is not a forced one. However, if you want to upgrade to the Official edition v4.0.0 later, an annual fee is required.

3. After I pay an annual fee for Self-Developed Smart Life App, are the Custom Domain Name and SSL/TLS Certificate services covered in the fee?

Yes, they are. Self-Developed Smart Life App is supplied with the configuration of a custom domain name. The Custom Domain Name and SSL/TLS Certificate services are provided at Tuya’s cost.

4. What are the differences between iOS and Android in support for new versions of Smart Life App SDK (v4.0 and later) and legacy SDKs (earlier than v4.0)?

After the paid SDK versions are released, if no significant faults or security compliance issues occur, Tuya will not release fixes to the legacy versions for free. Routine iterations will focus on the paid versions.


6. What are the differences in features between the new versions of Smart Life App SDK (v4.0 and later) and legacy SDKs (earlier than v4.0)?

7. Do the paid versions of App SDK (v4.0 and later) support tablets, such as Apple’s iPads and Android tablets?

No, tablets are not supported yet.

8. Will I be charged additionally for the use of UI BizBundle and Extension SDK?

Currently, the Lighting Scenario UI BizBundle is provided with an additional fee. For more information about the pricing rules, see Lighting Scenes.

No, the account system will not be affected by the upgrade to v4.0.

The App SDK Trial edition has a limit of up to 100 registered users in each of Tuya’s six data centers.

Tuya deploys 6 big data centers around the world to provide end-users in over 200 countries with secure, stable, fast, and compliant IoT cloud services. These data centers include:

11. I was asked to purchase the Official edition of Smart Life App SDK on the Tuya IoT Development Platform. Can I use the originally free SDK versions in the app development?

Currently, all new SDK-based apps on the platform are built based on Smart Life App SDK (v4.0 and later) that requires an annual subscription. Legacy free SDKs (earlier than v4.0) are not supported in the app development. The Trial edition is available for free, but it supports only up to 100 registered end users in total.

Note: If you have created apps with the Smart Life App SDK earlier than August 26, 2022, these SDKs can still be used for free. You can also purchase an annual subscription and upgrade to the SDK version v4.0 or later. If you do not require this upgrade, do not click the Upgrade button next to your SDK-based app, as shown in the following figure.

12. After I purchase the Official edition to use Smart Life App SDK v4.0 or later, can I use the SDK to develop and launch multiple apps?