To connect a Zigbee device to the Tuya IoT Development Platform and mobile apps, your development must follow a set of end-to-end specifications. This topic describes these specifications and provides examples for better understanding.

The following core concepts guide you through the understanding of the specifications. 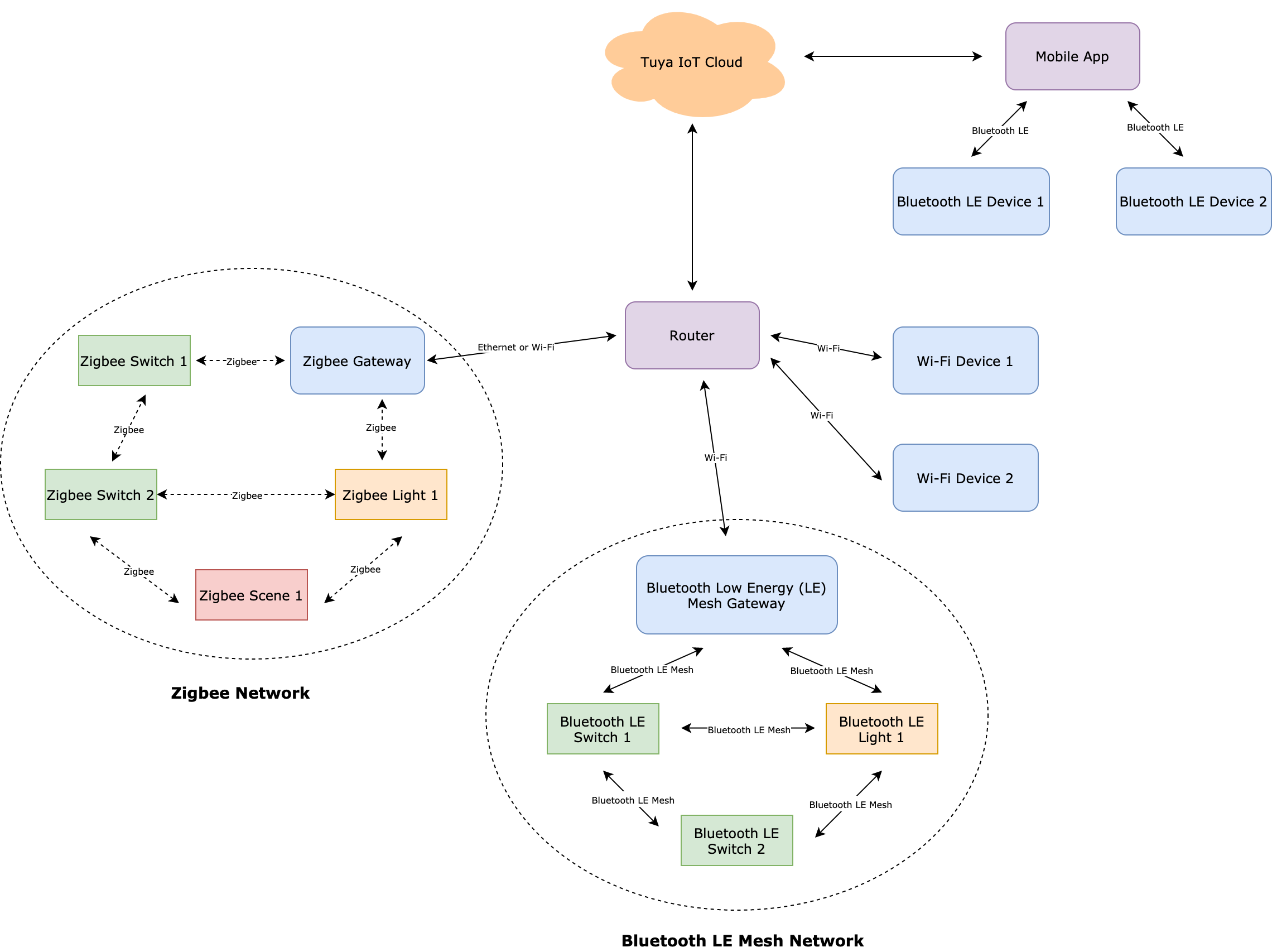 As shown in the diagram above, Zigbee devices can be connected to the cloud through a Zigbee gateway and then be controlled with a mobile app. Acting as a mediator, the cloud enables connectivity and interoperability across protocols such as Bluetooth Low Energy (LE) mesh and Zigbee.

For example, users can set up the linkage between the Zigbee switch 1 and the Bluetooth LE mesh light 1 by using the mobile app.

The unique identifier of a product created on the Tuya IoT Development Platform. The Tuya IoT Cloud identifies products by PID and then sends data to a specified mobile app for display. The PID is the vital information of a product, which is typically written to the firmware code.

The PID of a Zigbee device must be stored in the manufacturer name attribute in the basic cluster.

DP ID is a unique identifier assigned to each function (a DP). The bidirectional communication between Zigbee devices and the cloud is based on DP data. 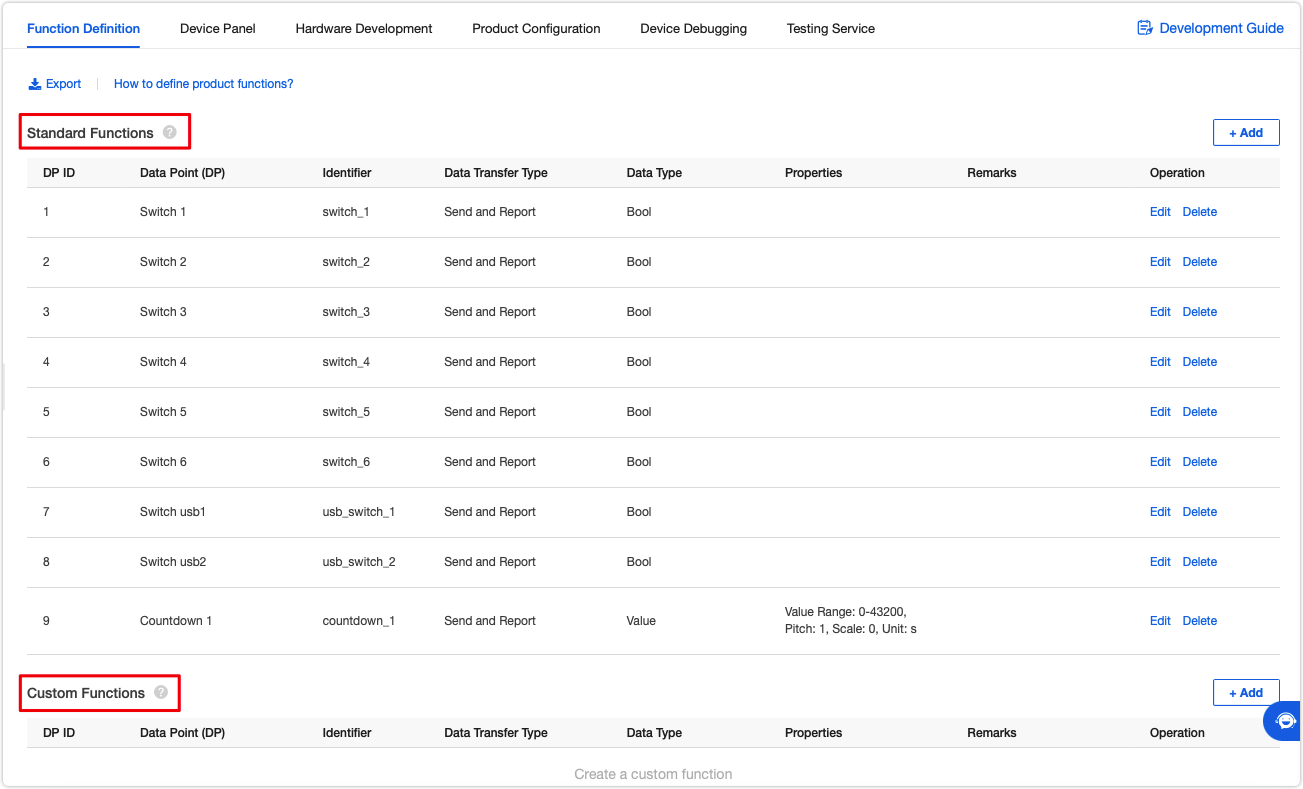 The identification information of firmware, which is generated after you Add Custom Firmware on the Tuya IoT Development Platform. The firmware key is associated with the PID and contains information including firmware identifier, firmware version, chipset platform, firmware type, update channel, and more.

Generally, you do not need to take care of the firmware key. But when multiple PIDs share the same firmware, you must specify the firmware key in your code and enable OEM settings.

You must use the information of the firmware key specified on the Tuya IoT Development Platform for code compilation, including firmware identifier, firmware type, chipset platform, and firmware version. Otherwise, the flashing and authorization using Tuya’s host will fail.

The license serves as the authentication information for device connection to the Tuya IoT Development Platform, which must be written to the chip in production.

In the pairing process, when a device attempts to connect to the cloud over a wireless router for registration, it sends the license to the cloud for authentication.

Generally, when a PID is written to firmware code, the compiled firmware only applies to this PID.

If several PIDs have identical functions, they can share the same firmware. Therefore, we can use the OEM logic without compilation per each PID.

For the OEM firmware, only the firmware key is written without PID. The compiled firmware can apply to different PIDs that belong to one product category.

The mode ID is a convention used to allow a Zigbee gateway to quickly identify the type of Zigbee device that has joined the network.

It is stored in the mode ID attribute in the basic cluster. For example, if mode ID is TS0505B, it represents a white and colored light.

The firmware version number is stored in the application version attribute in the basic cluster. The data type is 8-bit unsigned integer. 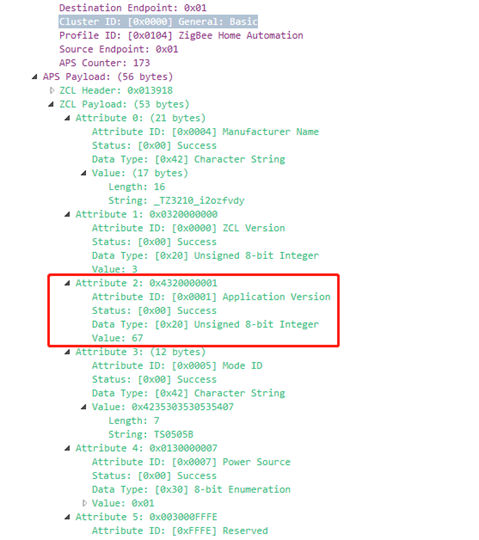