Zigbee generic docking is suitable for scenarios where the Zigbee standard protocol is not supported or not very suitable. In this scenario, the Zigbee device mainly acts as a transmission channel between MCU and Zigbee gateway, i.e., it encapsulates the data sent by the gateway in the format of serial protocol and sends it to MCU, and at the same time, it encapsulates the MCU data received from the serial port into the data format of Zigbee ZCL layer and sends it to Zigbee gateway, and then the gateway completes The gateway will then complete the data interaction with the Tuya IoT. In simple terms, the Zigbee network is used to connect the MCU to the Tuya IoT, thus realizing the intelligent upgrade of the product.

The product is based on the standard Zigbee 3.0 protocol

In the zcl layer, the private command id is used to represent the different data interaction commands, and the private frame format is defined in the ZCL payload in the form of sequence number (2byte) + DP data, and the data format of DP data is shown in the table of DP data formats. 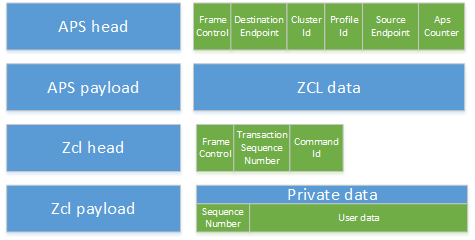 The frame format of the Zcl head can be found in the following table.

Over The Air Upgrade

The data frame for UART communication between the Tuya Zigbee module and the MCU consists of a Front, a Ver, a Cmd, a Length, a Data, and a Check, defined and described as follows

Requirements for the networking process

At least 15s after the data is reported

The module needs to report the heartbeat in about 2 minutes, with the device version number in the heart state

Development based on Tuya Zigbee SDK