NB-IoT network consumes only about 180 kHz bandwidth and uses the licensed band. It can coexist with the existing network in three deployment modes, including in-band, protection band, or independent carrier wave. NB-IoT network can be directly deployed in a GSM network, a UMTS network, or an LTE network to reduce the deployment cost and realize a smooth upgrade.

The development of the NB-IoT service scale is closely related to the carrier service model. Its applicable scene is the applications with “small traffic, mainly reporting, long-term hibernation, sensitiveness to power consumption, and low mobility”. In order to carry a large number of low-power devices in the NB-IoT network, the most important technologies are PSM and eDRX.

First network access delay: after the NB terminal is powered on, the terminal and the network have lots of message interactions, including authentication, channel establishment, and IP address allocation. It takes 6 to 8 seconds to complete the network access, and obtain the IP address for later data transmission.

From the above, it can be seen that the low-power consumption mechanism of the NB application is inseparable from the configuration of SIM card operators. Therefore, when purchasing a SIM card, make clear the APN service you handle. Different APNs are suitable for different application scenes.

Consult Tuya staff when you do not know how to choose APN service.

When the product functions are complex or the SoC solution cannot meet the requirements, you can choose the MCU connection solution.

In this solution, Tuya module is only used as a data transmission channel. MCU connection solution is often used for large and small household appliances, security sensors, and other categories of products.

Benefits: compared with the common AT instruction development mode of NB-IoT modules on the market, Tuya NB-IoT general connection serial port protocol mode is more beneficial. The development threshold of customers is lower, the maintenance is simple, and new products can be connected more easily.

The platform recommends the common module models when you create a product. Here is an example of the NM1 module, which is mostly used in the NB-IoT general solution.

Establish the minimum system of hardware 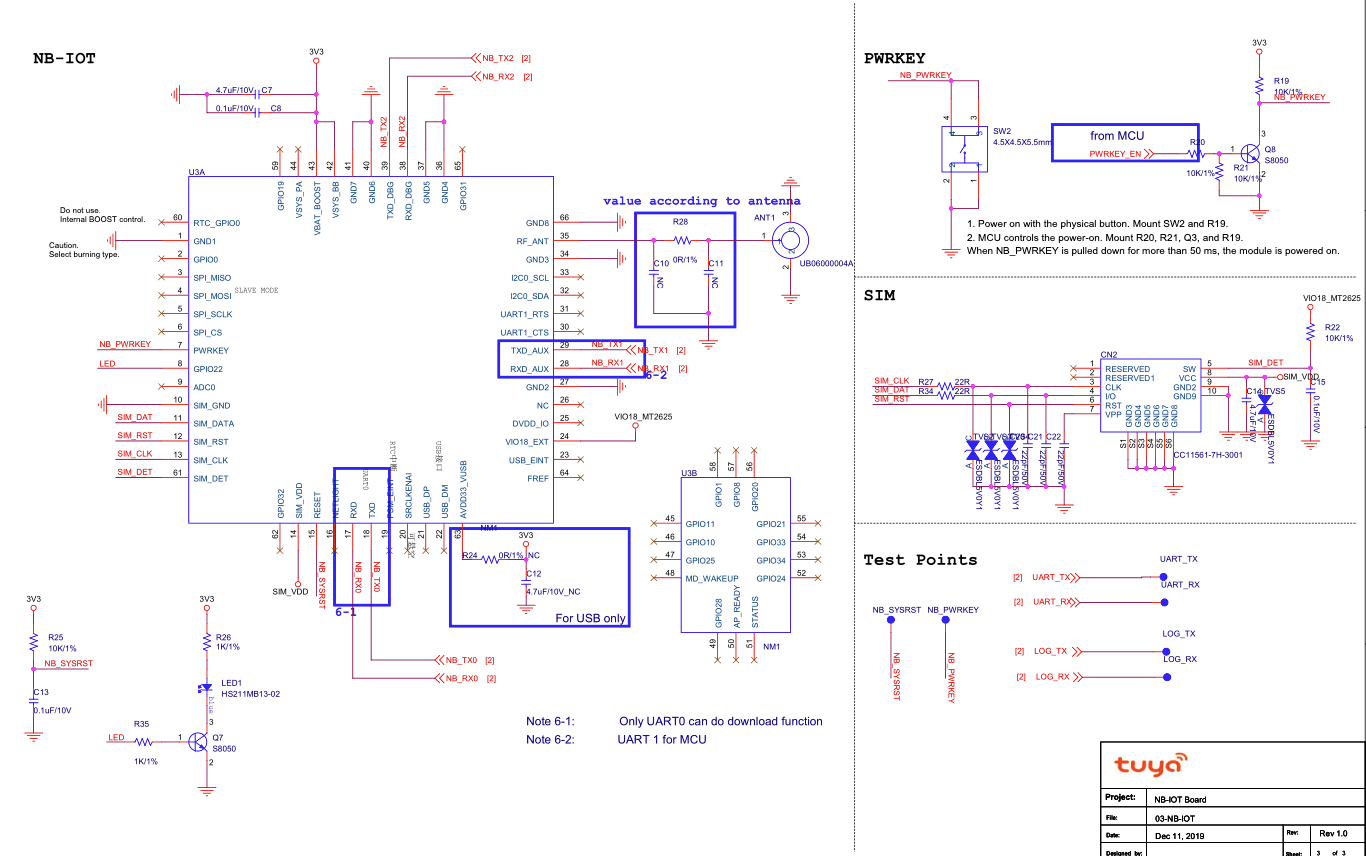 When receiving the module, it is suggested that, before you start coding, you run the provided module debugging assistant to check if the module can work properly. In MCU simulation mode, connect the module and configure the network for practice. Meanwhile, you can get familiar with the protocol interaction process, which will help you to proceed with development debugging.

In MCU simulation mode, the debugging assistant simulates the MCU to automatically respond to the module with the correct protocol data. After you bind the module through the app, you can test DP data reporting and sending. The procedure of operating the assistant and module network configuration is as follows. Before the operation, you need to learn about the operation instruction of the Tuya module debugging assistant. For beginners, see Module Debugging Assistant Instruction.

Note: after power on, the NB-IoT module will constantly send commands to query the product information. When receiving the correct response, it will proceed with the initial protocol interaction. If the module does not send data after power on, check if the peripheral circuit of the module is correct. 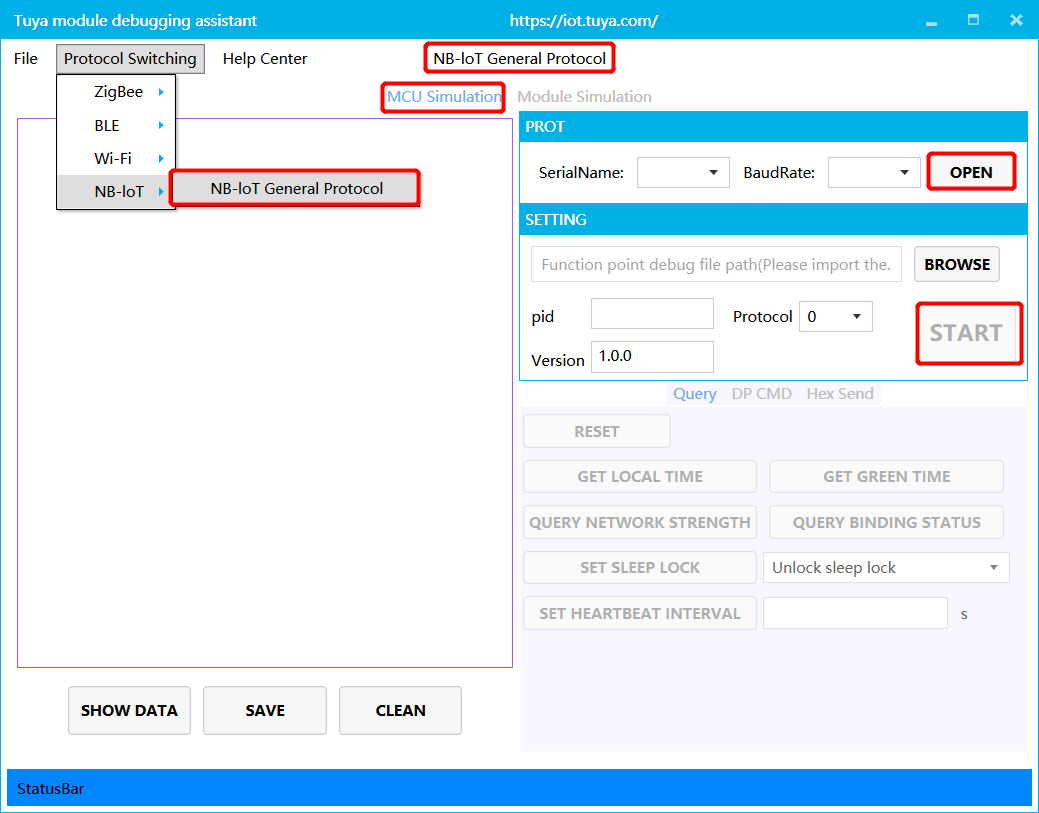 Scan QR code with the app and bind the module

There are two methods to connect the MCU to Tuya module protocol, migrating MCU SDK, or connecting the protocol by yourself.

Connect the protocol by yourself

If the MCU resource is limited or migrating MCU SDK is inapplicable, you can connect the protocol by yourself.

If the MCU resource is sufficient, it is recommended to directly migrate MCU SDK, which facilitates the development process. MCU SDK in the development documents is the protocol application code in C language, and it can be directly imported to the MCU project. MCU SDK requirements for MCU hardware resources: 4 KB Flash, about 100 bytes of RAM. RAM is related to DP data length. A 9-level nested function is adopted. If the resource is limited, you can connect the protocol by yourself. The functions in the SDK package can act as references.

After migrating to MCU SDK, you can use the module debugging assistant in module simulation mode to verify the code. The operation is similar to the MCU simulation mode. In the module simulation mode, the assistant automatically sends the initial interaction process to verify whether the MCU response is correct. Prompts will be sent in case of data error. After the initialization interaction is passed, you can manually click other extension functions for testing. After function verification is completed, you can connect the actual module to configure the network and carry out joint debugging.

Note: the module simulation mode only verifies the MCU serial port protocol, and does not support networking. 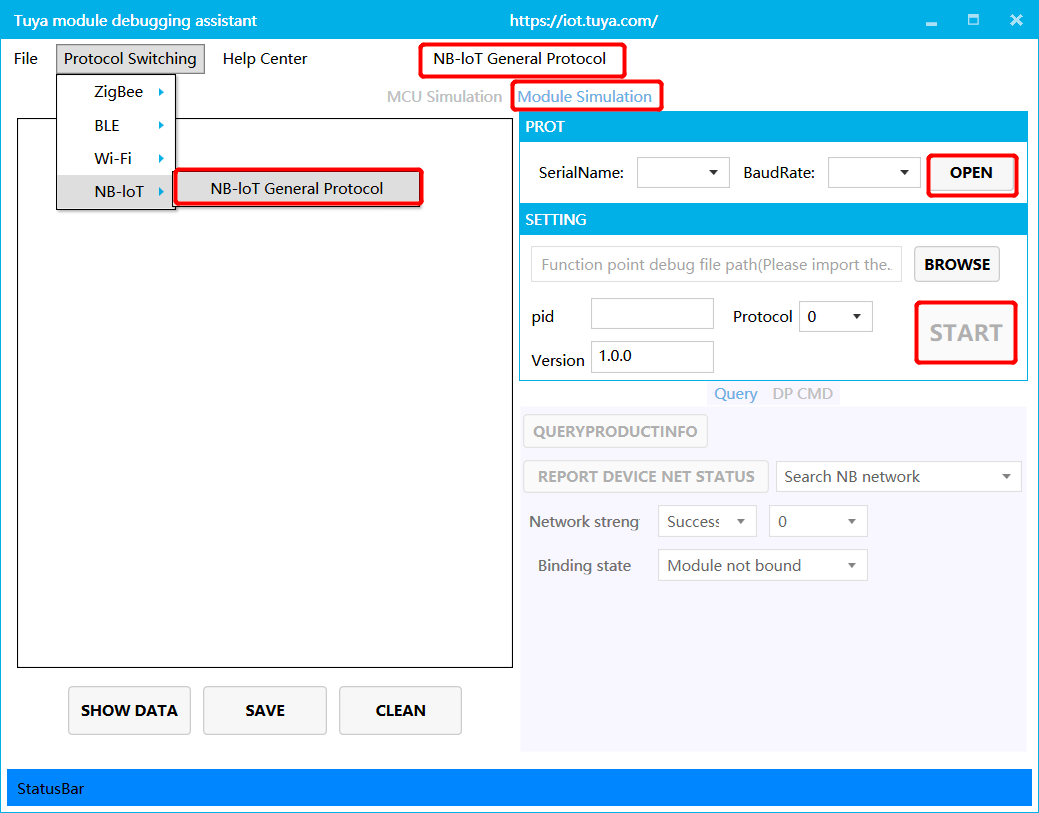 FAQ: learn about the frequently asked questions during development.

This section contains the following topics to help you quickly understand related concepts and how-to guides: