Wi-Fi general solution is one of the major MCU connection solutions. Connect the MCU to the Wi-Fi module through the serial port to enable device network access. Tuya provides the complete development services from modules, apps to cloud services.

Compared to other communication solutions, the Wi-Fi module delivers a better user experience. It can directly connect to the cloud through a router without the gateway, which ensures easier data operation and faster data transmission.

The communication diagram of Wi-Fi general module connection is as follows: You can find the specific description of creating products in MCU Connection Solution. Refer to the section of Product creation.

Log in to the IoT console and create a product. Select the desired product, and select Wi-Fi for net pairing mode. After finishing creation, you select the functions, panel, module, and firmware based on your product, and download the MCU development documents accordingly. For certain product categories, a power type is an option. You select the standard power for products powered from mains electricity. For battery-powered products, low power is recommended. 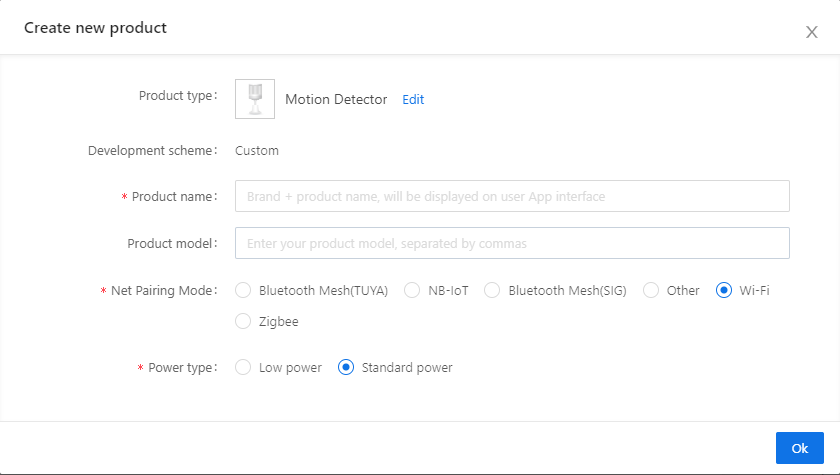 The platform recommends the common module models when you create a product. The mostly used Wi-Fi modules for Wi-Fi general solutions are described as follows. According to the packaging types, the Wi-Fi module is classified into three series, namely series one, two, and three. The common models are as follows:

Note: The average working electric current of Wi-Fi common modules is within 100mA and the peak electric current reaches over 400mA (sustained current in microseconds). Take the electric allowance into consideration during power design.

When receiving the module, it is suggested that, before start coding, you run the provided module debugging assistant, and connect the Wi-Fi module in MCU simulation mode to check if the module can work properly. Meanwhile, you can get familiar with the protocol interaction process, which will help you to proceed with development debugging.

In the MCU simulation mode, the debugging assistant simulates the MCU to automatically respond to the module with the correct protocol data. After you configure the network through the mobile phone, you can test DP data reporting and sending. The procedure of operating the assistant and module network configuration is as follows. Before the operation, you need to learn about the operation instruction of the Tuya module debugging assistant. For beginners, you can refer to Module Debugging Assistant Instruction.

During hardware debugging, you will see a sequence of serial port protocol interaction data between the module and MCU. To understand this data, refer to the protocol documentation in the development documents.

The protocol consists of the basic protocol and function protocol.

There are two methods to connect the MCU to the Tuya module protocol, migrating MCU SDK, or connecting the protocol by yourself.

Note: The module simulation mode only verifies the MCU serial port protocol, and does not support networking. After finishing the test, connect the MCU to the actual module and proceed with joint network configuration debugging. 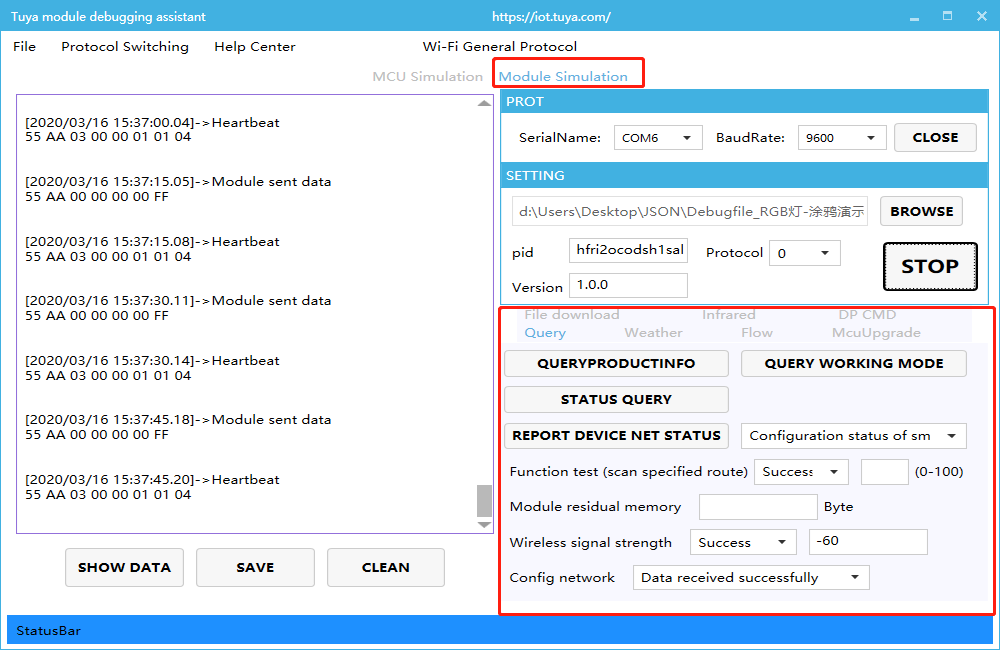